During my travels, I’ve been fortunate to see and experience much that is worth sharing.

My hope is that these images touch your hearts, much as the USA’s natural beauty has touched mine.

May the adventurous among you benefit from the travel information I share on these pages! 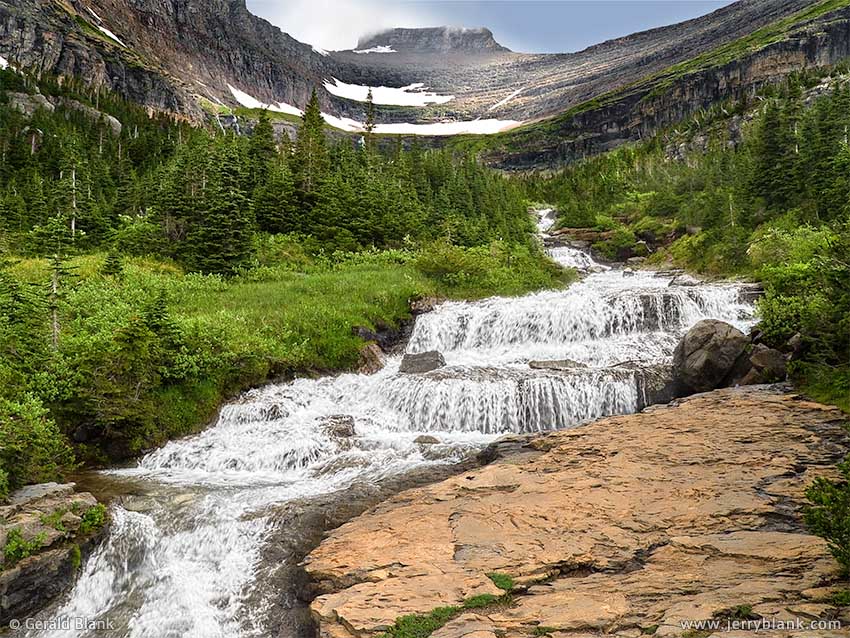 Before the turn of the century, I had visited one of my favorite places—Glacier National Park— twice with my family. During the second trip, my son was but a year old, and he has no memory of that experience. A dozen years passed before I was finally able to return to Glacier with my son, who by that time was 14 years old. We made that trip in 2006, and I took the greatest of pleasure in showing him all the scenic places I had discovered during my previous trips.

On July 7, we followed Going-to-the-Sun Road westward to Logan Pass, and I decided to stop at the Lunch Creek cascade to take photos of the waterfall, which has Pollock Mountain for a backdrop. Unlike other scenic points in Glacier, there are no trailheads at Lunch Creek. Undeterred by this, my son bounded over the rocks as I snapped my photos, and was quickly out of sight.

He reappeared in a moment, pointing excitedly toward the massive stone shoulder of Piegan Mountain on the east side of the creek. “Let’s climb that mountain!” he begged.

“There’s no trail,” I objected, which was the truth. None of Glacier’s mapped trails lead to its steep mountain peaks, for obvious safety reasons. Besides, I was a bit sore from the previous day’s hike, and was not inclined to stray from the safety of our SUV to bushwhack through unknown terrain. Before long, though, I yielded to his enthusiasm. He was reluctant to bring his heavy leather jacket, but I insisted that was part of the deal. 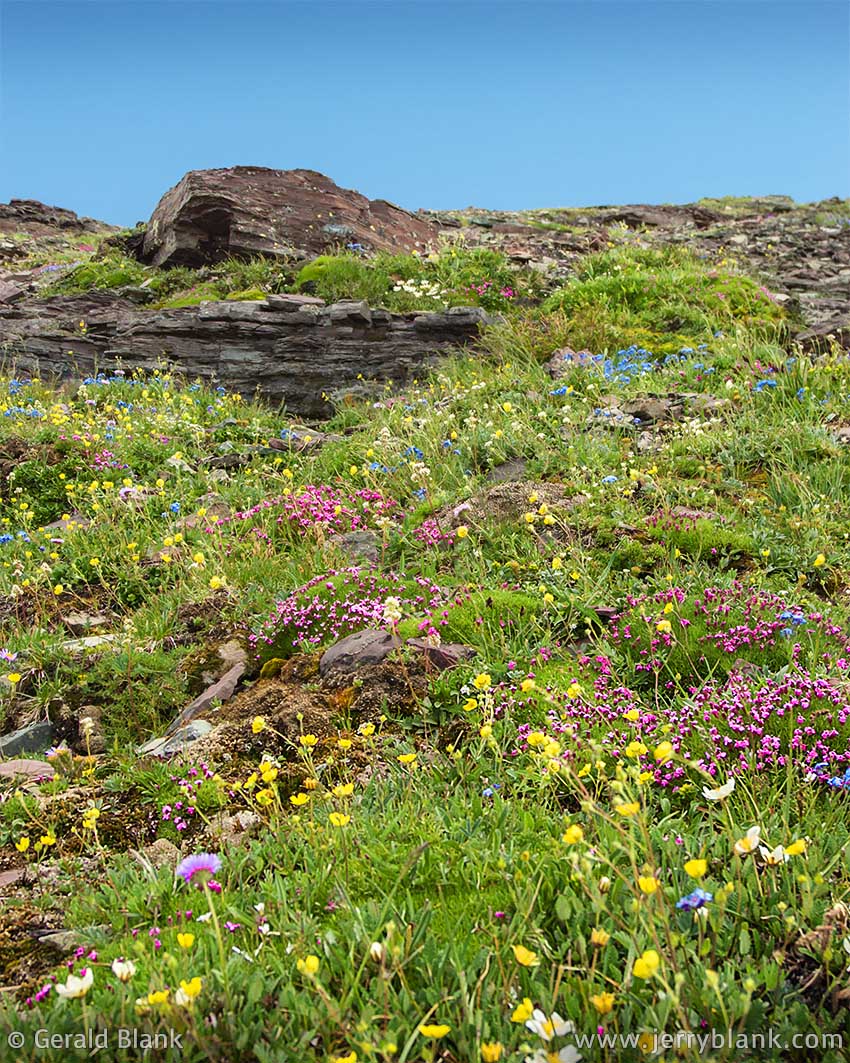 Piegan Mountain: Not just a big rock, but an alpine garden above the treeline.

We followed Lunch Creek, climbing stair-like rocks as the creek splashed down past us. While there was no beaten path as such, I saw red ribbons tied on branches and realized that there was in fact a trail of sorts, and at least a few climbers had been there recently. So with renewed confidence, we scrambled up a series of ledges that led away from the creek and toward the south face of Piegan Mountain. After breaking out of the trees, we could see a couple of climbers in the distance, hiking up toward Pollock Mountain.

Up here there were no more ribbons—just a couple thousand feet of rocks, it seemed. But we continued upward, keeping to the greener patches which provided surer footing than the loose stretches of talus covering much of the slope. Though I was getting a good workout and would normally be sweating, the stiff cold breeze kept things comfortable... but every so often, the breeze would turn into a gust, strong enough to make the eyes water, and plenty strong enough to make me lose my footing. A few times, the gusts forced us to sit down until the wind subsided. My son now understood why I insisted on the leather jacket. 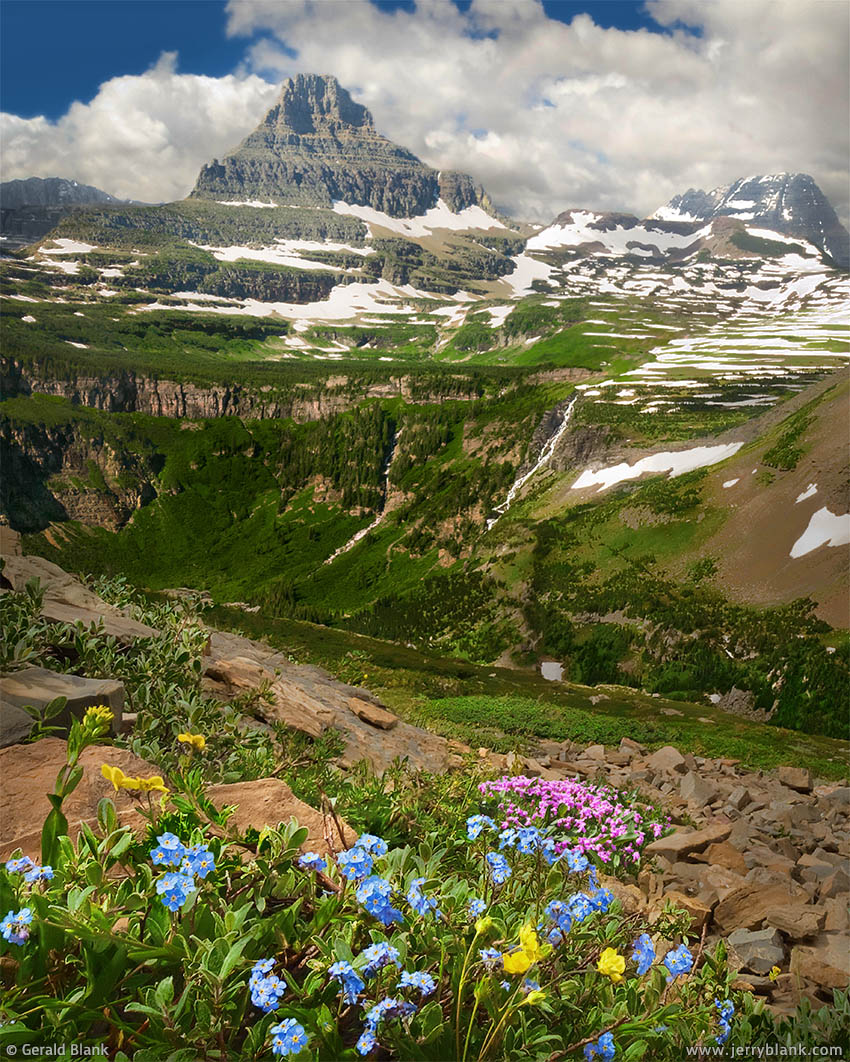 After a tough but short climb, we had a much better view of Reynolds Mountain and the Continental Divide — Click / tap image to view full size

The few evergreens on these slopes are kept short and bushy by the winds. In spite of the rocky terrain and harsh environment, I discovered, Piegan’s slopes are full of tiny wildflowers, in bright primary colors—magentas, yellows, and blues—miniature versions of the wildflowers along the highway.

I was enjoying all this, but we had ascended 1600 feet into thinner air and my son was getting impatient with all the “breathers” his creaky old dad had to take. I’m normally not afraid of heights, but we had climbed up so far that distant snow-capped peaks were coming into view. For some reason, the sight was giving me a mild case of vertigo. “We should head back down,” I counseled. “The fun will be over if these clouds get thicker and it and starts raining.”

In spite of my concern, I was glad to have come up this far. From our vantage point, we could see the peaks of the Livingston Range to the west, and had a much grander view of Continental Divide, the Hanging Gardens, and the valley which sprawls in an emerald carpet from the foot of Reynolds Mountain eastward to St. Mary Lake. No way could we have seen it like this from Going-to-the-Sun Road 1600 feet below us.

This is the best way to see Montana, I realized—getting off the beaten path. 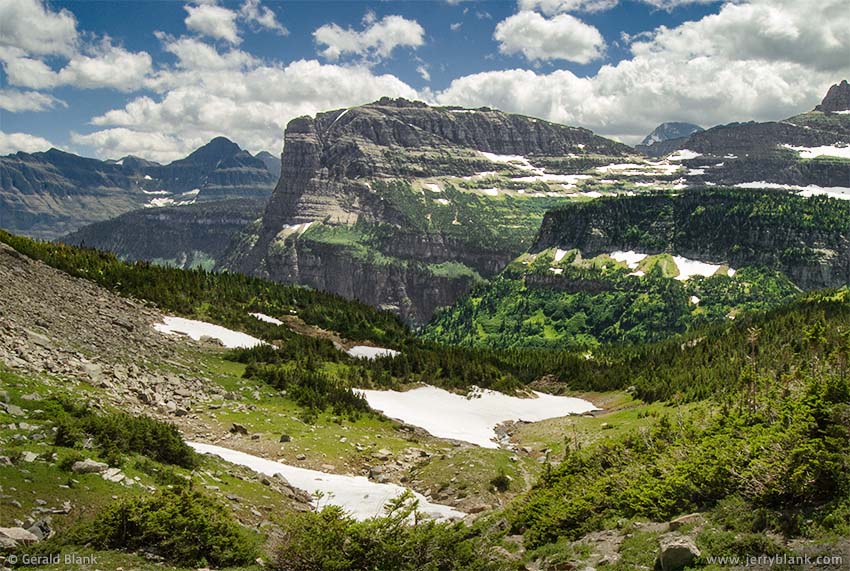 One interesting feature we noticed on the opposite (south) side of the valley was the profile of Heavy Runner Mountain, which resembles the head of a buffalo. The mountain was named after Chief Heavy Runner of the Blackfeet tribe of Native Americans.

We turned back toward the west face of Piegan and made better time on the way down. This time, I picked a route which led west below Pollock Mountain. Once we descended to the snowdrifted headwaters of Lunch Creek, we simply followed the creek down Pollock. My son was not too disappointed that we cut our climb short. “I was starting to get hungry, anyway,” he said. A little farther, he added, in a lower voice: “When I get back to the car, I’m going to tear up that sandwich.”

“Maybe next time you climb a mountain, you’ll bring your munchies,” I laughed. “You’re lucky I brought an extra pack of M&Ms.”

But soon enough, we made our way to the upper falls of the creek, and scrambled down alongside the falls till we were back at our SUV. We wasted no time in digging our lunch out of the cooler. Hungry though we were, I resisted the urge to inhale my sandwich and took small bites while looking at the scenery and resting my tired legs.

“I just realized why they call this ‘Lunch Creek’,” I exclaimed as we ate. Corny, but it seemed funny at the time.

Early in 2006, I sold my film camera—a trustworthy Nikon FE2—and took my first plunge into the world of digital photography. It had been some years since I had done any serious landscape photgraphy, so that year was the beginning of what has been a non-stop learning process!

At that time, I discovered an online tool that I still lean heavily upon: Google Earth. Using Google Earth imagery, I could compare places on a map to what I saw on Google Earth, and better visualize the road conditions and terrain. 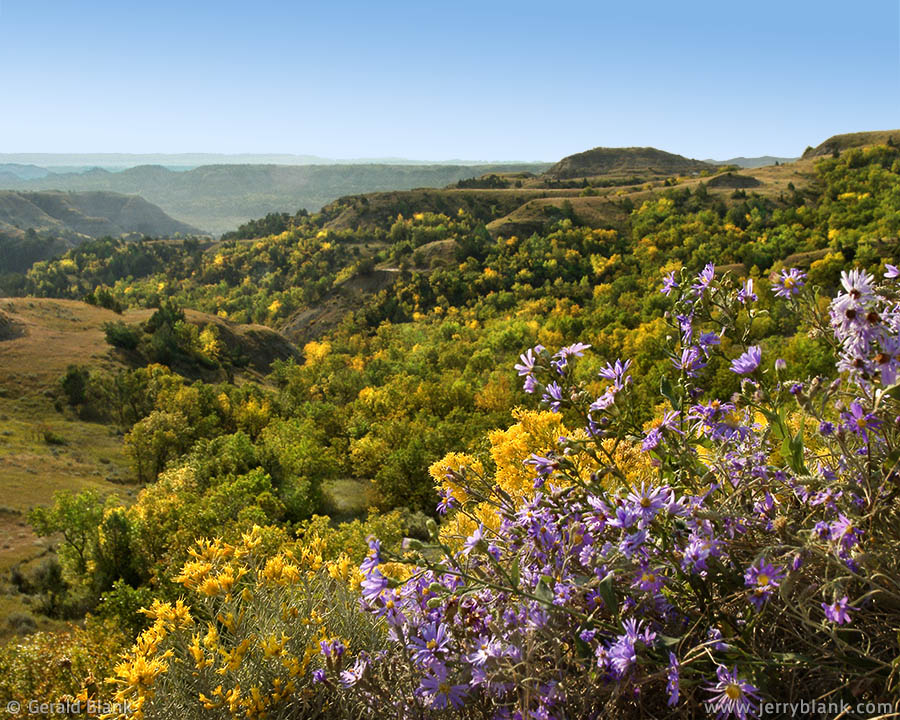 In some places, I discovered markers in Google Earth that, when clicked, displayed photos shared on Google Earth by “those who had gone before.” In those early days, few photo contributors had ventured into the North Dakota “outback”. But in places where multiple photos have been uploaded, both Google Earth and Google Maps have served me well as a preview of what I might see, before actually traveling to the place in person.

I began that adventure early in the morning, exploring north of the river in McKenzie County, and was surprised to find such a diversity of color in the upland breaks—as can be seen in the photo shown here. Not just the dull earth tones one usually associates with the Badlands, but an abundance of goldenrod and rabbitbrush, along with patches of pale violet prairie asters. Hillsides dotted with juniper, elm, and golden aspen trees made the perfect backdrop.

Enthralled by what I’d discovered just a few miles off the pavement, I consulted my map of the Grasslands and picked a route that would lead me to the north bank of the Little Missouri River.

In that state of mind, I’ve been known to cast common sense to the North Dakota winds, and so it was that morning. For reasons unknown to me at the time, the route marked as a “road” on the map had not been maintained for years, and was nearly obliterated and impassable in places. Besides all that, I had to let myself through a few barbed-wire gates bearing “No Trespassing” signs. Undeterred, I coaxed my SUV onwards toward my destination. I was about to learn that a good chunk of the Grasslands—although publicly-owned—is leased to cattle ranchers. The leased areas are not intended for public access. 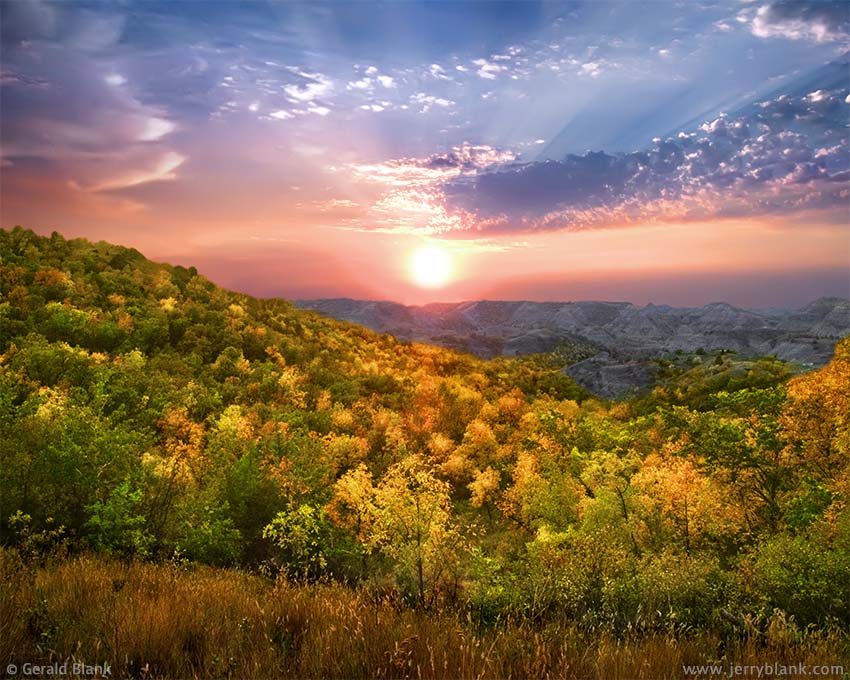 Finally, where my route descended to the river, a fenced-off bog halted further progress, and I had no choice but to make a U-turn. Alas, I turned too close to the riverbank, and my SUV sank into the slick, boggy clay near the river. As you probably know, once the undercarriage of one’s vehicle hits the ground, traction is lost—and with it, all hope of getting out unassisted.

Amazingly, help came within minutes, in the person of an irate rancher astride an ATV. His son-in-law had spotted me from the high bluffs on the Dunn County side of the river. The older rancher was in no mood to assist me; I had, after all, disregarded all of his “No Trespassing” signs on my way into the place. But before leaving me, he was kind enough to ask his son-in-law to help me get unstuck from the muck.

By the time the two of us got the job done, it was midafternoon. I expressed my gratitude for the help I was given, but as I made my way over a truss bridge and onto a “real” access road to Dunn County, I felt frustrated and embarrassed about my morning mishap, and the hours of delay it had caused.

The delay, I would soon learn, was actually a helpful gesture from the Universe, for as the sun sank toward the bluffs in the west, my SUV and I had just climbed out of the deep Bear Creek drainage south of the the Little Missouri. The route I traveled snaked past stands of bur oak and eroded clay bluffs. When I reached the top, I pulled over in time to see the last rays of sunlight shine through patchy clouds, and setting the treetops alight. Had I not been delayed earlier, I doubt I would have experienced the place and time as I was meant to, nor captured my best autumn photo of that year.

The photo I captured that evening, shown here, doesn’t do justice to the scene, even though I punched up the color saturation a bit. Thinking back, I am no longer surprised at that. I am not the Creator of North Dakota’s landscape, and couldn’t possibly have imagined the scenery before finding my way there, and seeing it with my own eyes.

Since 2006, I’ve realized that my beliefs about “bad timing”, “crappy luck”, “poor conditions”, and many other things, are just that—only beliefs. As such, they can be corrected with an attitude adjustment. Moments such as the one pictured above can be savored much more fully when I have an open, non-judgmental attitude, and am willing to roll with whatever Life sends my way.

Getting my car stuck taught me a valuable lesson: Ask for directions, and don’t rely solely on maps! I also gained a bit of common sense that day: Now I contact landowners before entering their property. That M.O. has been more successful, and has given me the chance to make new friends!